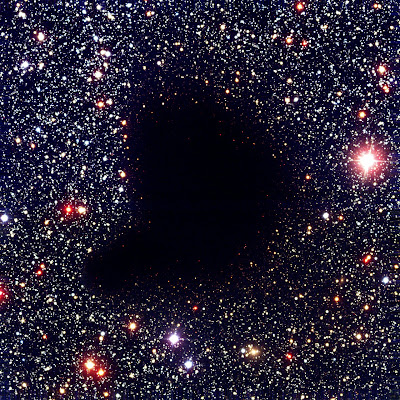 Thousands of stars, and a gaping hole!
I stumbled on this pic, and furthur reading pointed to some exciting info.
This is a Bok Globule. Dark dense clouds. One of the coldest objects in the sky with temperatures around -270 degrees (3 kelvins). The dark clouds have hydrogen, helium & some inter-stellar silicates, and are so densely packed, making it opaque at optical wavelengths. 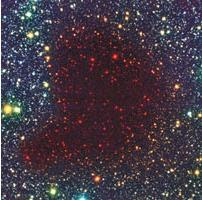 But become transperent at infra-red wavelengths, showing the background stars.

In 1947, Bart Jon Bok declared that these objects lead to birth of stars!!!

The Blok globule in picture is called Banard-68, at around 400 light years from earth. As you notice with no other star in between, weighs twice the solar mass, and is half a light year across. Temperature is around -257 degrees (16 kelvin).

Banard-68 is at a preliminary stage of star formation. The inwardly gravitational pull is balanced by outwardly gas pressure. At some point this stability is lost, gravatational power wins, and matter would condense to form stars. Banard-68 is said to be marginally stable, and in a few million years could collapse on it self, and may lead to birth of one or two Sun sized stars.

So, ladies and gentlemen, coming up soon, in the place of the darkness would be dazzling stars!

Posted by Akash at 1:21 PM 2 comments: Links to this post